Once worn by celebs, Venkatgiri Jamdani sarees now locked up in bundles

Venkatgiri, Andhra Pradesh: G Ramanaiah fondly remembered the day he was felicitated with the Sant Kabir Award in 2009, by then President of India Pranab Mukherjee. His designs were making their way into the homes of Bollywood celebrities until the COVID-19-induced lockdown affected his business greatly.

The 70-year old is a third-generation handloom artisan. He has been running his business of designing, producing, and marketing Venkatgiri Jamdani sarees for many years now.

"We use Persian techniques to make sarees and wall hangings that depict the Mughal gardens, Lord Krishna and Balaram adventures, the Kamdhenu and the Kalpavriksham and other such mythological designs," said the artisan, speaking to NewsMeter. 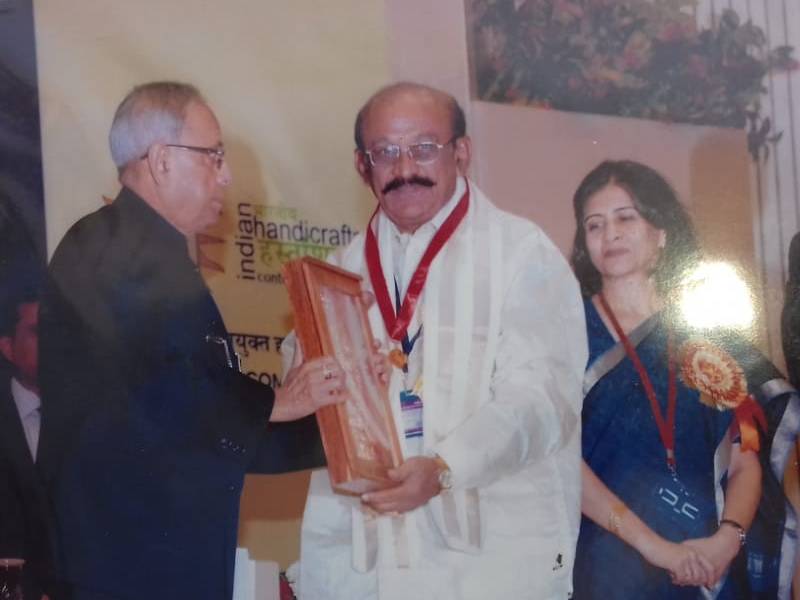 G Ramanaiah being felicitated by President Pranab Mukherjee in 2009

He further added with pride, "Prime Minister Narendra Modi once gifted a wall hanging made by me to the Bangladesh Prime Minister Sheikh Hasina."

His sarees have even been adorned by Sonali Bendre and Sridevi, owing to designer Manish Malhotra showing interest in his work. G Ramanaiah and his wife with designer Manish Malhotra

Around 150 workers in the village of Bangarupet, Nellore district, work with Ramanaiah to create designs through handlooms. "We use handlooms instead of power looms because they add a unique beauty to the design. All the artists work from their homes bringing in their own flair," he added.

Ramaniah's sarees and wall hangings also traveled to Delhi, Mumbai, Hyderabad, and Bangalore to be put up for sale at the arts and crafts festivals held each year. But due to the lockdown, most of them have not been opened, giving a blow to Ramanaiah's business. Designs created by G Ramanaiah are also sold at textile markets across the country, such as the Laxmi Textile Market in Hyderabad. Owing to the pandemic, however, that aspect of his business suffered too.

He further added that while he had the option of doing business online, he is reluctant. "The online mode of transaction is worrisome, and the few times I have tried it, there have been monetary issues," he adds. A few of the artisan's designs (Kamadhenu and Krishnaveni)

Though his business did not entirely stop the supply of raw materials has come down affecting production. He is able to sell enough now to retain production. He hopes that times will go back to the way they were when his designs would again find their place in people’s homes along with their hearts.