These three south Indian states have the most dangerous National Highways

Hyderabad: In 2018, black spots on national highway killed 54,046 commuters. Three states of the south, Tamil Nadu, Karnataka and Telangana have been identified to have the highest number of black spots, but the deaths were more in Uttar Pradesh.

A black spot is an area where road accidents have historically been concentrated.

According to a report of the Ministry of Road Transport and Highway (MoRTH), Uttar Pradesh has 104 black spots, the highest in the country, followed by Tamil Nadu (102), Karnataka (86) and Telangana (76). 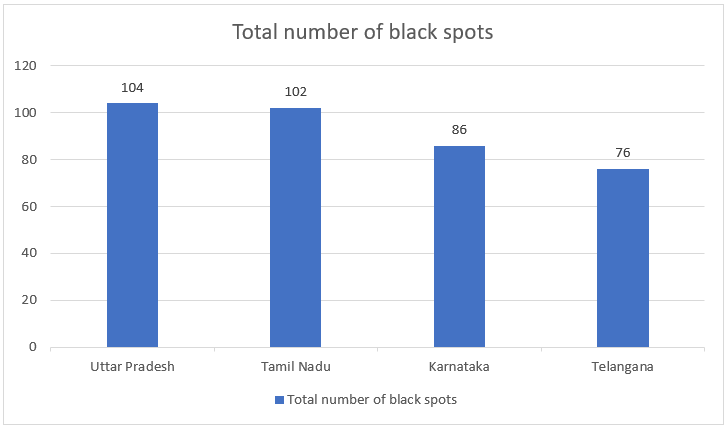 Of the black spots on Telangana’s Highways, 26 are under the jurisdiction of the state PWD, while the remaining are maintained by the National Highway Authority of India. Kerala has 33 black spots where 12,614 died in three years, said the ministry data. Arunachal Pradesh and Mizoram have the least number of black spots in the country.

As per the MoRTH report, road accidents occur due to a host of reasons such as use of mobile phone, driving under the influence of alcohol or drugs, overloading, poor light condition, jumping signals, overspeeding, neglect of civic bodies, weather condition, driving on wrong side, defects in roads, fault of cyclists, fault of pedestrians and many more.

Stressing that black spot management is crucial to road safety, MoRTH has decided to take up an “Integrated Road Accident Database” project with funding from the World Bank. The project aims at gathering and analysing accident data to prepare a comprehensive policy and take steps to curb road accidents on national highways in the country.