Hyderabad: Bharat Bio-tech, a Hyderabad-based pharma company, has got approval to conduct human trials of its Coronavirus vaccine. The Indian Council of Medical Research hopes that the vaccine prepared by this firm will be ready by August 15.

The message was also viral on WhatsApp. 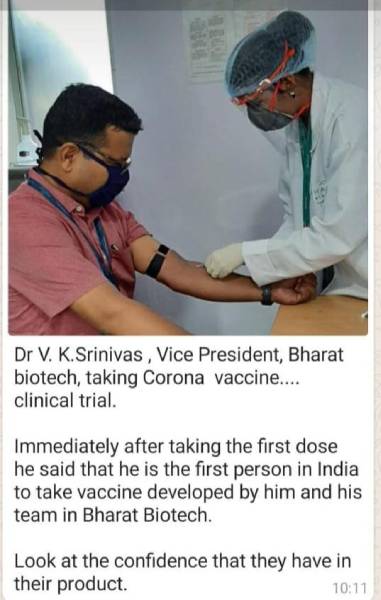 Also Read
Fact Check: No, Sushant Singh Rajput's 'Pavitra Rishta' has not been taken down

As the images went viral, Bharath Biotech company on their Twitter page confirmed that the claim was fake.

It said that, "Certain images and messages being circulated on WhatsApp and other social media platforms have not been disseminated by Bharath Biotech. The image being circulated is a routine procedural blood draw for testing all production staff."

The vaccine has been currently sent to 12 institutes where human trials are to be held for Covaxin. Furthermore, the Chairman and MD of Bharath Biotech Dr. Krishna Ella stated on July 1 that they are waiting for a few more clearances and the human trials will be started in 10 days.

Hence, the claim that Dr. V. K. Srinivas is the first person to take the Covid-19 vaccine developed by their own company is false. The image shows a routine procedure of blood draw from all production staff in the company.