Hyderabad: One of the unsung heroes of space is Soviet cosmonaut Vladimir Komarov. His spaceflight on Soyuz 1 made him the first Soviet cosmonaut to fly into outer space more than once, and he became the first human to die on a space mission—he died when the Soyuz-1 space capsule crashed after re-entry on April 24, 1967, due to a parachute failure.

A picture showing a charred body in an open coffin is in circulation claiming that it shows the remains of the astronaut Vladimir Komarov, a man who fell from space, 1967. 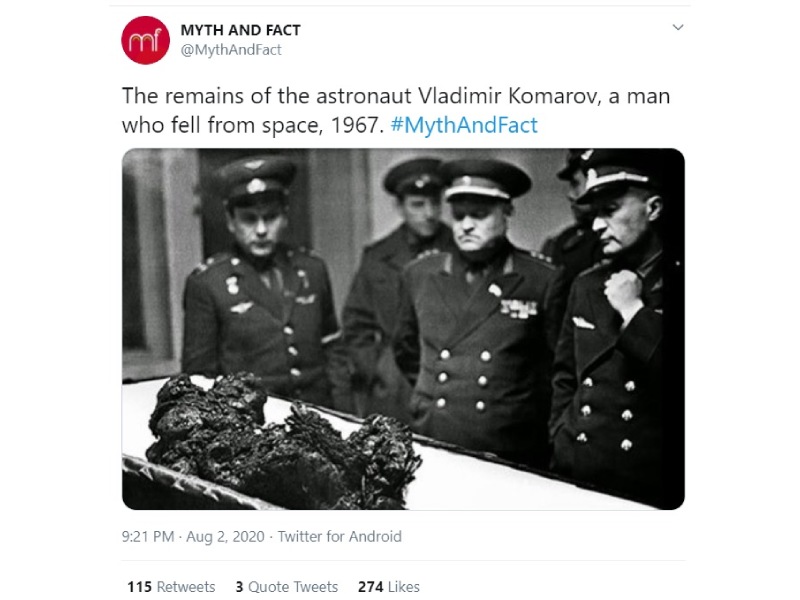 Archive links of the claims can be found here and here.

The claim is TRUE.

Vladimir Mikhaylovich Komarov was born in Moscow on March 16, 1927, where he grew up along with his sister Matilde. At the age of 15 years in 1942, Komarov entered the "1st Moscow Special Air Force School" to pursue his dream of becoming an aviator.

In September 1959, Komarov was promoted to engineer-captain and was invited to participate in the selection process for cosmonaut candidates along with approximately 3,000 other pilots. He was one of only 20 candidates selected for "Air Force Group One".

Unfortunately, Vladimir Komarov didn't enter the group of six, trained for the first-ever mission to space. Nevertheless, he became the first. He was the first to test Voskhod-1 spacecraft in October 1964.

In 1966, Komarov was assigned to the Soviet Soyuz program along with Yuri Gagarin and Alexey Leonov. Vladimir was selected to command the Soyuz-1, in 1967, with Gagarin as his backup cosmonaut. On April 23, Soyuz-1 was launched into the orbit. After completion of various checks and tests, he successfully re-entered the Earth's atmosphere on his 19th orbit, but the module's drogue and main braking parachute failed to deploy correctly and the module crashed to the ground, killing Komarov.

On April 26, 1967, Komarov was given a state funeral in Moscow and his ashes were interred in the Kremlin Wall Necropolis at Red Square. After this flight, Vladimir Komarov was posthumously awarded Second Order of Lenin and also the Order of Hero of the Soviet Union.

A website named rarehistoricalphotos.com, showing the viral picture reports, states that it is not the first human fatality in outer space because he died when the capsule crashed to the ground.

The above photograph shows the charred remains of Komarov being looked over by Soviet officials during his open-casket funeral. Only a chipped heel bone survived the crash.

According to Dailymail.co.uk report, before blast off, several malfunctions were reportedly found within the rocket and its capsule, and even Komarov, a father of two, knew he would not make it back alive.

But, in a bid to save his friend, he reportedly told demoted KGB agent, Venyamin Russayev: "If I don't make this flight, they'll send the backup pilot instead." He perished trying to descend back to earth when the rocket's parachutes failed to open.

When Soyuz I reached an altitude of 23,000 feet, a parachute was supposed to deploy, bringing Komarov safely to earth. However, the lines of the chute had gotten tangled during the craft's re-entry difficulties and there was no backup chute. Komarov plunged to the ground and was killed.

There was vast public mourning of Komarov in Moscow and his ashes were buried in the wall of the Kremlin. Sadly, Komarov's wife had not been told of the Soyuz I launch until after Komarov was already in orbit and did not get to say goodbye to her husband, reports History.com

Hence, the claim that the viral image shows the remains of Russian Cosmonaut Vladimir Komarav is TRUE.