Fact Check: Visuals of corpses at Osmania General Hospital morgue are from 2013 video

COVID-19 cases are increasing drastically in India. After the testing increased in Telangana, the state has seen a sudden surge in the positive cases. Many misleading videos and images are in circulation on social media trying to project that the situation in the hospitals of Hyderabad is very bad.

A video is going viral on WhatsApp, showing piles of corpses and claiming that this is the situation in the mortuary of Osmania General Hospital. 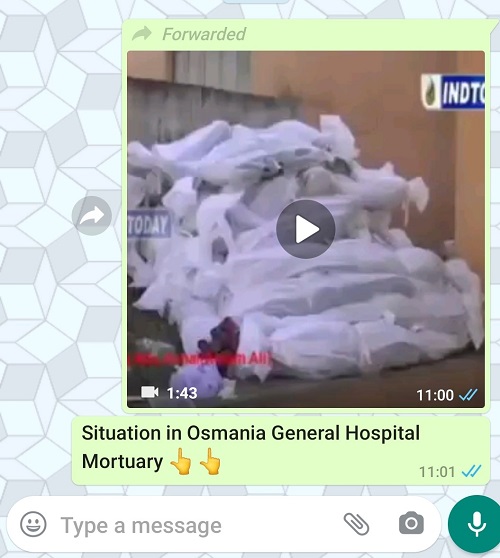 The video tries to highlight that the situation in the morgue is horrible and hospital management is not able to dispose of the bodies.

Also Read
Fact Check: Viral video of patients lying outside the hospital is not in Hyderabad

The claim that this video shows the present situation in Osmania General Hospital Mortuary of Hyderabad is MISLEADING.

On performing Reverse image search, we found a video was uploaded on 'IndToday' on December 25, 2013, with a caption 'Unclaimed bodies pile up at OGH mortuary | Hyderabad Osmania General Hospital'

The visuals from the 2-minute-long video have been extracted and shared with the claim that it depicts the present-day situation in Hyderabad.

These visuals were also found embedded in a short video uploaded on a Persian video sharing platform 'milanvideo.com'. This video has later been shared on other websites.

Hence, the claim that this video shows the present situation in Osmania General Hospital Mortuary of Hyderabad is MISLEADING.