Hyderabad: Pandemic notwithstanding, cybercrime has surged by 39% in Hyderabad and Cyberabad districts, cumulatively, during the first half of 2020.

While Hyderabad district witnessed an overall increase of 38% in complaints (First Information Reports and Petitions), Cyberabad saw a 1.8% spike. In both police divisions, the number of FIRs registered in the first half of 2020 was proportionately higher than the corresponding period of 2019. The number of petitions registered at Hyderabad increased by 27%, while it dropped by 9% in Cyberabad.

Despite the surge, the crime rate in Hyderabad and Cyberabad is still below the national average of 86%. 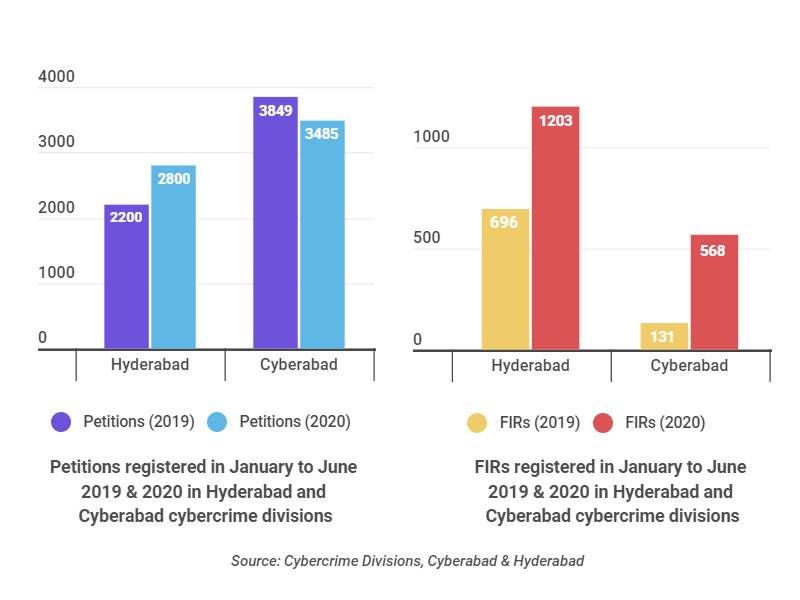 While the usual cases of OLX frauds, OTP frauds, Paytm, KYC frauds showed an increase, cyber criminals tried to capitalize on the pandemic and defraud gullible people by trying to sell facemasks and sanitizers online with tantalizing offers, officials at cybercrime divisions said.

“We received several complaints where people paid for a bulk order of masks and sanitizers and were duped,” said Assistant Commissioner of Police (ACP) V Srinivas Kumar, who also heads the Cyberabad Cybercrimes Division.

Kumar noted that they received complaints that fraudsters were offering home delivery of alcohol since liquor shops were shut during the lockdown. Complaints regarding liquor delivery were also registered in the Hyderabad division.

Another common cybercrime trend observed at the national level was the creation of fake websites. The websites asked people for donations in the name of the PMCares Fund. However, such a trend was not witnessed in Hyderabad. “We ran awareness campaigns so that people do not fall victim to such calls,” said ACP KVM Prasad, who heads the Hyerabad Cybercrime Division.

ACP KVM Prasad said 1203 FIRs related to cybercrimes were filed in the first half of 2020 compared to 696 FIRs in the corresponding period of January to June, 2019.

“The number of job frauds, matrimonial frauds, and insurance frauds was minimal during the lockdown,” the ACP said.

Data accessed by NewsMeter reveals that 568 FIRs were filed in the first six months of this year compared to 131 in the corresponding period last year, at the Cyberabad Cybercrimes office.

There was a 71% increase in the number of FIRs filed during the lockdown. Job frauds, Paytm frauds, OLX frauds formed the bulk of FIRs. Job frauds were higher in March but it dropped in April and May and surfaced again in June.

Petitions registered in the division decreased by 9% in the first half of 2020 with authorities receiving only 3485 complaints. However, petitions related to job frauds, advertisement portal frauds, and social media frauds showed an increase. “While cybercrimes are bound to increase, the pandemic allowed fraudsters to experiment with a different modus operandi,” ACP Srinivas said.

Officers at both the divisions said that because of the lockdown, the police faced difficulty in solving the cases. “Most of the fraudsters are from outside the state. Since traveling was banned, we could barely solve the cases. Our bureau was only able to solve approximately 10% of the cases,” ACP KVM Prasad said.

Stressing that their bureau usually focuses more on cases where the loot runs in lakhs, ACP Srinivas agreed upon the same.